This one is for the shark lovers!

When it comes to shark encounters, nobody does it better than in Beqa Lagoon!

Beqa Lagoon is located off the coast of Viti Levu, around 2 hours drive and a short boat ride from the capital of Suva. The area is known for its world-class shark diving and divers from throughout the world have travelled there to experience this incredible dive! The waters, now a Shark Marine Reserve, have a healthy population of 8 different species of shark including silvertip sharks, grey reef sharks, white tip sharks, tawny nurse sharks, black tip sharks, sicklefin lemon sharks, bull sharks as well as the occasional tiger shark!

There are a number of dive operators that can take you out to experience the thrilling shark dives but being that we were staying at Waidroka Resort, we dived with them. The diving is run by Sam and Ilse who are extremely lovely people! There are about 20 dive sites all within 20 minutes of the resort, and Sam and Ilse know each site like the back of their hand! The entire team at Waidroka are dedicated to the conservation and protection of the sharks of Fiji which I found quite inspiring. This only enhanced my shark diving experience; being lead by people who are truly passionate about the waters they’re diving and the creatures they’re diving with! 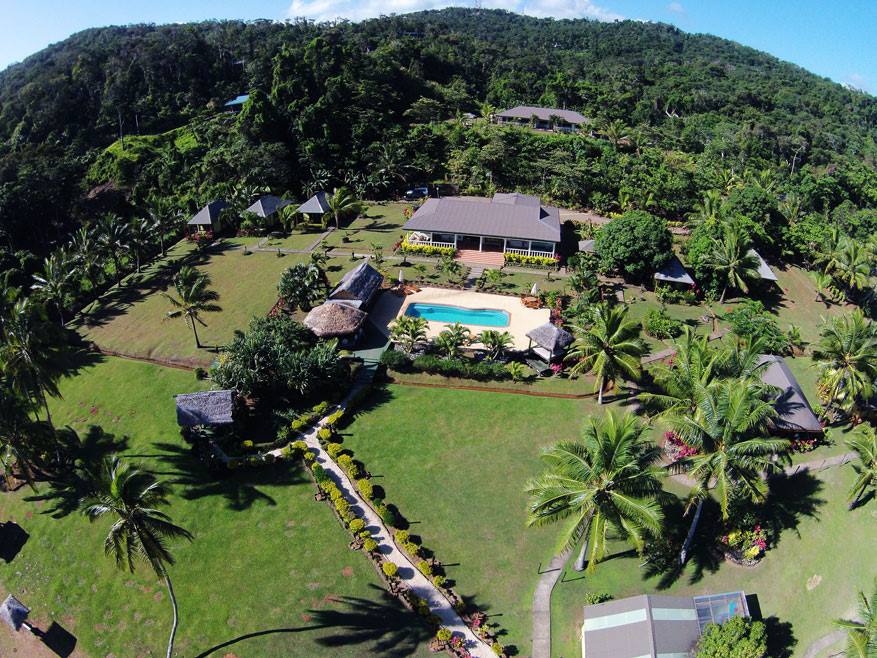 All of the staff at Waidroka Bay Resort are extremely friendly and go above and beyond their duties to help make your stay a comfortable one. The resort is located right on the beach and there is also a pool your can relax by! The food is fantastic at the resort, making me feel like I was staying at a luxury resort! (Order the enchilada! It’s delicious!) There is a bar next to the restaurant that has great vibes and is the perfect place to meet like-minded travellers and other divers as well as the locals.

I stayed in the panoramic ocean view room, which whilst quite a hike up the stairs, offers views that are well worth the climb! The whole resort has a community feel to it, from the moment you arrive and the staff know your name to when they are waving you goodbye.

The beach out the front of the resort is great fun. I had a few non-diving days and found that there were a myriad of activities to pass time (excluding when I was lazing by the pool!) I went for a surf, trekked through the rainforest, played around on the SUP boards and even fit in a game or ten of pool (That’s not to mention the kayaks, darts, chess volley ball, snorkelling etc…!)

There are heaps of sites within motoring distance of the resort. The main ones include; The Aquarium, Manta Point, Tukini, Serua Wall and Twilight Zone. Depending on which site you visit will depend on what you’re likely to see. Visit The Aquarium for and the macro stuff; nudi branchs, flat worms, and a myriad of detailed corals. Manta Point on the other hand has turtles, mantas, white tip reef sharks and huge barracuda and trevally!

The shark dive is about an hour drive from Waidroka, however the team clearly have experience in running shark dive trips and everything ran smoothly. Before I knew it, we had motored out to the dive site and I was descending.

I vividly recall glancing down and seeing LOADS of sharks gliding below me!

The further down we got, the more I found myself completely and utterly mesmerised by these HUGE, graceful creatures.

We knelt on a ledge whilst the instructors attracted the sharks, then the frenzy begun…. The atmosphere was absolutely insane, with fish and sharks swimming in every possible direction. Aside from the sharks, there were also moray eels, anemones swarming with clown fish, giant sea cucumbers, giant trevalley and groupers all drifting amongst brightly coloured hard and soft corals.

After 15 minutes of an awe-inspiring show, we began to ascend to a different spot at which we begin another feeding station for the grey reef sharks. These guy were seemingly little compared to the bull sharks but weren’t at all shy!! They were drifting over me practically dragging their stomach along my head! And all of this was just ONE of the numerous shark dives!

Note: be aware of the FJD$20 marine park fee.

A big THANKYOU to the team at Waidroka for my incredible Fijian experience!